Everything you need to know to connect a Windows 8 (or any other) laptops to a 5.1 AV receiver surround sound

So you got an AV receiver recently and want to hook up your computer to it. Yep, not a lot of people are relying on the Blu-ray DVD player anymore with the advent of high quality online content. I had to go through a lot of readings in the course of a weekend, I thought I'll compile the notes that I took (and all the resources) on a single post.

First thing first, getting the cable connection right. Here's a guide for connecting a MacBook to the TV to see all the possibilities.

In essence, we prefer the highest quality connection from the laptop to the AV receiver. The AV receiver will pass thru the video signal to the TV.

Hooking up the AV receiver to TV is straight forward. Usually the connection is in HDMI. However, there are various ways of hooking up the laptop: analog headphone jack, HDMI and finally optical.

Optical (SPDIF) arguably would be the best connection, but for most, having one cable running from the laptop for both audio and video is highly appealing. Therefore, I recommend to go for HDMI.

HDMI cables run between $3 to $300. All HDMI cables are the same. So as long as it has Ethernet, enough bandwidth (3D) etc, you won't need any gold plated, weather sealing, etc. : unless if you're running it for a long distance that is.

The next step is getting the computer ready. We would want to tell the computer to send the audio signal via the right connection. So let's change the default audio device from the Speakers to HDMI output/device (or digital output for optical if you prefer). Simply right click the speaker icon on the bottom right taskbar, and click ‘Playback Devices’. 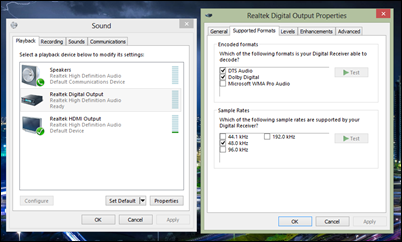 The next step that we want to do is to tell the computer that our AV receiver is capable to decode DTS and Dolby Digital audio content. This way, the computer do not have to do the processing and we would be able to tell from the receiver if we're indeed hearing a DTS, Dolby or just an analog Stereo signal (PCM).

If you don't see the supported formats tab, let's re-install the driver of your audio card (check in your computer spec, can it render 5.1/7.1 content, most would). Most laptop use Intel Realtek Audio chipset. You can download the Realtek ALC Audio Driver for Windows 8 from Intel's Download Center.

After you install the driver, you either get the options above, or at least a custom tab to allow AC3/DTS output like below. In this case, tick ‘Allow ACS/DTS/WMA ouput’ and reboot. 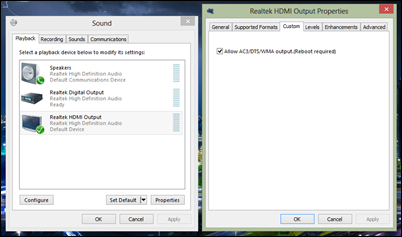 Now, it's time to get a media player. Plex is a personal favorite, which works well with all popular audio formats.

File format is a bit of a pickle. There's a lot of file containers out there from avi, mp4 to mkv. Each of them is capable of handling 5.1 DTS, AC3 or the usual boring stereo mp3. Plex fortunately tells you if what the sound format of the video is.

If you prefer to use Windows Media Player, you could also go through these steps for managing the encoding pass-thru

Let's play a video, and confirm that the AV receiver recognize the DTS/Dolby signal (most AV receiver will show the logo whether the signal is PCM, Dolby or DTS).

Not all our content will be natively 5.1/7.1. In this case, the default behavior of most AV receiver is to just play it as what the signal is designed to be played in : which would probably be stereo. You'd notice that the center and surround speakers will not make any sound. What a waste, right?

Luckily, DTS and Dolby came up with a smart algorithm to re-shuffle this signal to as if it was a 5.1 signal. Here comes the DTS Neo 6 and Dolby Logic Pro II. A lot of people argue that Dolby Logic Pro II is better for music and DTS Neo 6 is for movies. For my taste, both technology seem to rely too much on center speaker (try comparing this with the Multi Channel stereo mode e.g. Big difference!!).

My personal preference for movies would be using the Dolby Logic Pro II with the parameter adjusted to Music (panoramic: on, dimension: 3, center width: 2), which gives a more full ‘surround’ experience. Test it out and see what you like best.