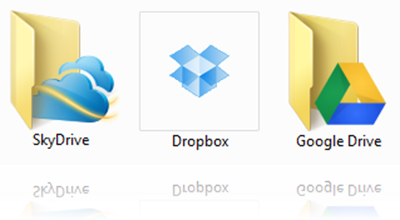 A few days back Microsoft announced enhancement to the new SkyDrive. It now works exactly like DropBox.  If you're confused about the differences between the new SkyDrive, the old SkyDrive and Live Mesh, then you're not alone. This post will try and clear up the confusion. Hang in there. I'm going to also compared it slightly with Dropbox and Google Drive.

Before the launch of the new SkyDrive, Microsoft used to offer 2 separate products: SkyDrive and LiveMesh.

SkyDrive was the online storage service that was used by the Microsoft Office Web App, all accessible from Live.com. There was no official supported way to automatically sync these files to your computer. I guess the combination of SkyDrive and Live Office Web Apps can be seen as Google Docs. An online only solution. 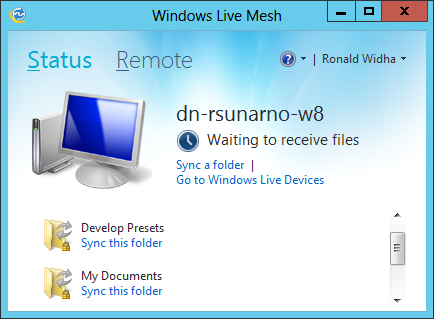 Windows Live Mesh (originally name Live Mesh, renamed to Live Sync and back to Live Mesh again’¦.I know.) was and still is an application that lets you sync folders across computers : including PCs to the cloud i.e. SkyDrive.
To see a list of the computers participating in the sync, you could go to Windows Live Devices. The SkyDrive storage will be listed as SkyDrive Synced Storage.

With Live Mesh, SkyDrive is optional. I set up a few of my folders to be synced-up only between computers. Which kinda means there is no size restriction as such. The only downside since the P2P nature of the communication is the participating computers have to be on at the same time.

Most of the confusion comes with the fact that our SkyDrive Synced Storage (used by Windows Live Mesh) is separated from the main SkyDrive. Confused? To put it simply, if you start a document from Live.com Office Web Apps, you won't see it in any of the Live Mesh folders. The same goes for the opposite. I can start a document locally on my computer, have it stored in Live Mesh & SkyDrive Synced Storage and I won't be able to see it on the main SkyDrive screen. 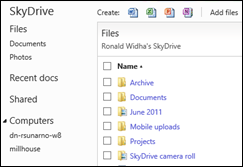 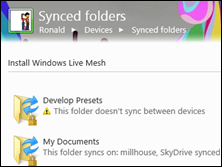 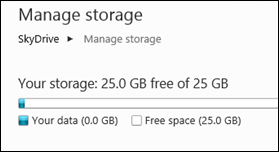 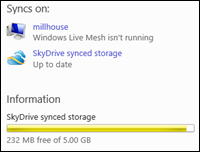 The new SkyDrive added a feature which makes it exactly the same as the DropBox model where you get a preconfigured folder where the content will be synchronized across between the cloud storage and your devices. For the consumers, this model is much easier to grasp and managed. 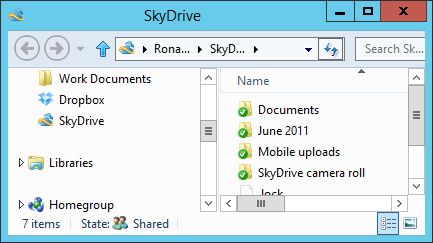 However for the power users, we'd miss the peer-to-peer feature of Live Mesh, which I'm guessing will at some point go away.

Which one to use?

I used to use Live Mesh heavily for peer to peer syncing my archived files. It's one folder with a few gigabytes of content which I don't need to have available on the cloud but would like to have on every computers. I then use Dropbox when I want to have it synced to the cloud as well. Also, partly because Windows Live Mesh didn't have a client on the iPhone too.

But now since Windows Live has increased to 25GB, I see very little occasion where I care about p2p synchronization anymore : or to use the 2GB Dropbox for that matter. 25GB is enough to fit almost all my personal data excluding videos, photos and music. I'm sure this is also true for most people.

Google has also just recently launched their consumer cloud storage offering Google Drive. But with 5GB of storage, at this point I prefer SkyDrive as my primary cloud storage. Having said that, if you use Google Docs heavily, you'd appreciate how Google Drive creates a local shortcut for all the Google Docs that you have as if they are local files. But they are indeed just shortcuts and you still need internet connection to edit them.