For scalability or what not, we often feel the need to run scheduled tasks. In Azure, worker role is perfect for that. Get an infinite loop and sleep command going, and you get yourself a background worker.

The problem with that is, firstly, once you get serious and need some visibility to the previous runs, we're now responsible for creating the history log repository and all that ourselves.

The second problem is more obvious, cost! I don't want to run a worker role just as what essentially a CRON job.

Put the background job on the Web Role, have it exposed as a url for e.g. https://somesite/tick and have it triggered by a scheduled task/CRON job.

You could pay for a CRON service. But supposedly if you're reading this than you probably already have at least 1 Compute Role, and most likely a Web Role (instead of a worker role). If yes, then read on : I'm going to take you through how to create a simple CRON-like service on Azure.

I use Asp.Net MVC2 so all I have to do is create a controller and have one single action like such:

2. We don't want to manually trigger the background action so let's create a console app as a trigger.

3. We need to deploy this to Azure, so let's include our HttpTaskRunner.exe along with its config into our Web Role project.

Don't forget to go to properties > Copy to Output Directory : Copy Always. This way the .exe will be packaged along for deployment. 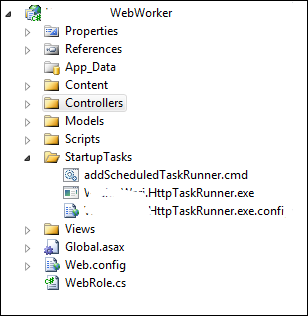 4. We will need to automate running the HttpTaskRunner.exe. We're going to need to set up a Scheduled Task on the web role using Azure StartupTask.

So let's create a batch script, let's call this addScheduledTaskRunner.cmd.

Open up the csdef file and the following: